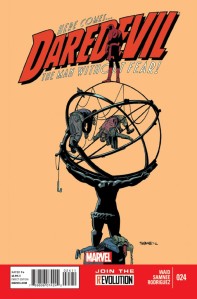 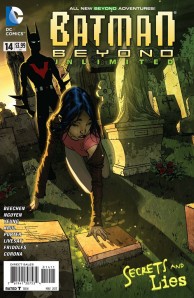 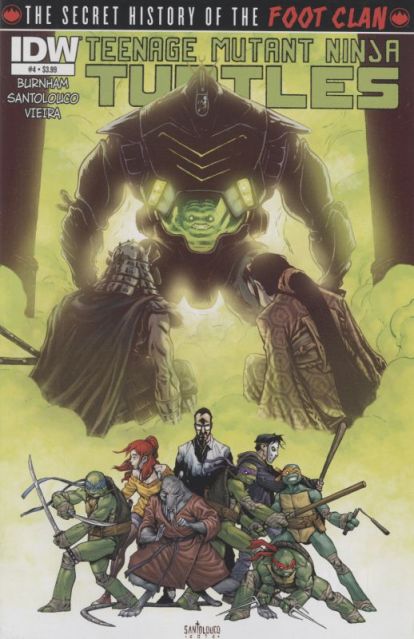 TMNT: Secret History of the Foot Clan #4
Mateus Santolouco certainly delivered one epic cover this week to take the third place spot. At the bottom of the page are our heroes, each one depicted in a dynamic action pose while situated in such a way so that they form one cohesive unit around Professor Miller. They are standing on a white background possibly signifying that they are the good guys but as you move up the cover the white is slowly overtaken by the green smoke emanating from the villainous scene taking place on top. The star of the cover is that of an Utrom in his exoskeleton body as his loyal servants the Shredder and Kitsune bow down in allegiance. He is depicted as a very sinister and powerful force to be feared and I love how he is so massive that he even obscures the title itself. The smoke surrounding them is coloured green which is appropriate considering the Utroms and their connection to the similarly coloured green ooze.  This may be the last issue of the mini-series but thankfully this is not the last we’ve seen of this artist as he is moving onto the ongoing title. Welcome news indeed!
________________________________________________________

Red Hood and the Outlaws #18
Mico Suayan is the runner-up this week with this ominous cover featuring Jason Todd aka the Red Hood. His arms our outstretched, guns in hand, as if to say he’s ready to spring into action and his back is to the reader which succeeds in obscuring his face. Is he positioned this way to hide his sadness caused from hearing of the death of Damian Wayne or, if you read the previous issue, is he turned in order to hide the awful truth of the damage that Joker inflicted on his face? Either way it makes for a very dramatic and mysterious pose for the former Boy Wonder. And then there’s what he is standing in front of: a wall covered in red paint that forms the clearly recognizable bat logo. It appears that he has shot the logo numerous times and from these “wounds” it is bleeding out a red substance.  Is he mad at Batman and is lashing out or did he not shoot at all and is merely witnessing the symbolic damaged dynamic of the once strong Bat-Family? Regardless, all this red is very reminiscent of blood and creates an overall foreboding and violent atmosphere with a tinge of sadness.
________________________________________________________

New Avengers #4
And here is the Cover of the Week by Jock who wins this distinction for the second time. He limits himself to only a pallet of reds, whites, and blacks and blends them together seamlessly to create a visually stunning masterpiece.  It’s a cover ripe with silhouettes with the dominating one belonging to the devourer of worlds, Galactus. He is depicted as a powerful, looming force in the distance, a force that is so large that not even the cover itself can contain his entire head. The white of his eyes pop off the page and really gives off a haunting glow while around his head are instances of the famous “Kirby Krackle” technique that was a trademark of his creator Jack Kirby and is a wonderful way to pay homage to a legend. Situated in front of Galactus stands the group of heroes in a wonderful display of size and scale to perfectly illustrate just how small they really are compared to him. The heroes are drawn in white silhouettes with just enough detail to enable the reader to clearly determine each one’s identity. They pop off the page next to the surrounding reds and are depicted in a trademark shot as they stand side by side, walking towards the reader. But why are they walking away from Galactus? Are they working with him? Are they unaware of his arrival? It compels you to open the book up for answers and like I always say…that is what truly makes a great cover. With that said, Jock, I award you the first place crown this week. Congratulations!
________________________________________________________

So those are my favourites and it’s a tie for Marvel and DC with a two apiece though Marvel did take the number one spot. Not to be left out, IDW manages to nab one spot for the Independents. What’s your personal favourite covers from the week that was? Comment below!