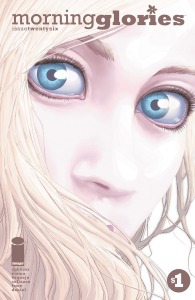 Masks #6
Alex Ross certainly delivered one beautiful cover this week to take the third place spot. Right front and centre are the heroes of our story: Green Hornet, Black Bat, Kato, the Shadow, Zorro, Miss Fury, Green Lama, the Spider, and Black Terror. They are shown as black and white photographs in something reminiscent of a class yearbook page or possibly a line-up of mug shots. The one thing that is certain is this is the mystery villain’s own personal hit list, the men and woman he needs to eliminate. We are only shown this unknown villain’s hand, a dagger firmly grasped in it, a dagger that he is using to X out the picture of the Spider. What does this mean? Did he eliminate the Spider? Is the Spider his next intended target? Who is this villain? If you look close enough you can make out his silhouette in the red jeweled pommel of the weapon, a mere glimpse but nothing too concrete that we can use to deduce his identity. It compels you to open the book up for answers and like I always say…that is what truly makes
a great cover.
________________________________________________________

Avengers Arena #8
Dave Johnson is the runner-up this week with this “fun” cover featuring Nico, Hazmat, X-23, and Darkhawk. The cover is a unique play on the various classic old-school board game box arts but instead of being made by Parker Brothers or Milton Bradley, this one comes to us from the twisted mind of Arcade Games and the title of said game, “3..2..1…DEATH!!!”, is apropos considering the book’s contents. I love how the bottom dots of the exclamation marks are actually little skulls and I also love how the artist incorporated the creative team credits onto the actual side of the box. The real stars of the cover though are the characters themselves. Their expressions of fear are captured spot on and the way they are pressing their fingers up against the box successfully creates the illusion that they are trapped inside the box art which is actually symbolic of how they are trapped in the comic in Arcade’s new twisted Murder World. A retro cover featuring young characters is a resounding success for this oftentimes controversial series.
________________________________________________________ 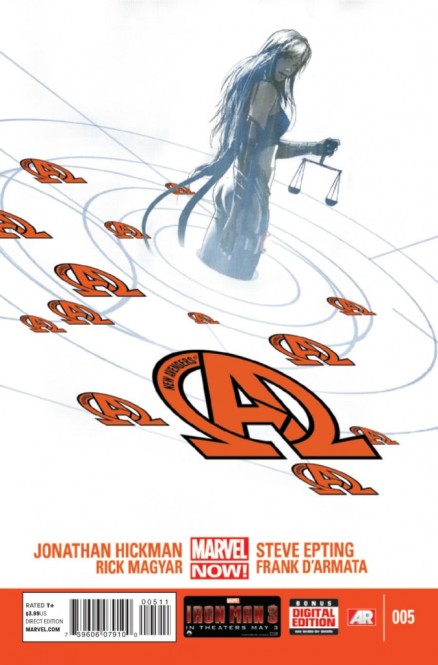 New Avengers #5
And here is the Cover of the Week by Jock who wins this distinction for the third time. Month after month, he is producing stellar cover after stellar cover and this is no exception. Featured on the cover is the character of Black Swan, rendered in an
ethereal colouring technique which really gives off a haunting atmosphere as she pops up through the centre of the cover. In her hand is the scales of justice which is a perfect metaphor in relation to the decisions our heroes have to make in the series, tough decisions that could lead them down a path they could never come back from, a path that would tip the scales in one favor over the other, but a path they might need to go down in order to save their world. The New Avenger logo is repeated multiple times on the cover which could represent the various parallel Earths that are on a collision course with one another and the various lines are drawn in a visually appealing way while also encircling Black Swan which could possibly hint that she is the key to this whole dilemma, she is at the epicenter of it all. This cover makes us think beyond our regular preconceptions, to analyze it beneath the surface, much as the comic itself asks us to do every time we crack it open. With that said, Jock, I award you the first place crown this week. Congratulations!
________________________________________________________

So those are my favourites and it’s a victory for Marvel with a three-to-two showing against the Independents. What’s your personal favourite covers from the week that was? Comment below!