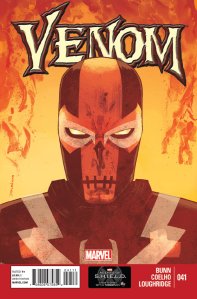 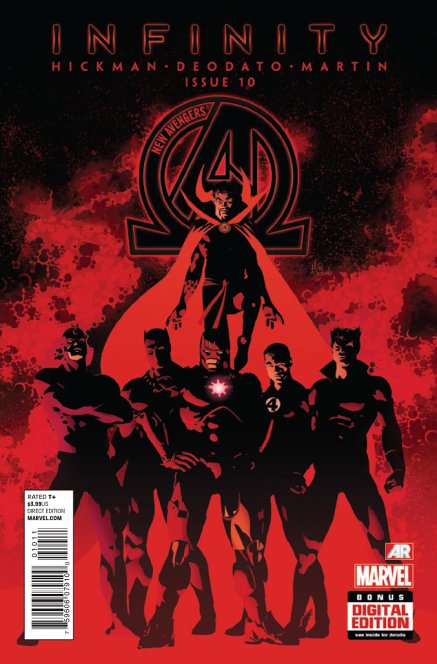 New Avengers #10
Mike Deodato Jr. certainly delivered one epic cover this week to take the third place spot. It is a cover that limits itself to using only reds and blacks, a choice that works brilliantly. Not only does it unify our cast but it succeeds in creating the perfect balance of shadows while causing the reds to pop off the page. Black Bolt, Black Panther, Iron Man, Mr. Fantastic, Namor, and Doctor Strange are all drawn with confident and defiant poses showing that they are not afraid of the challenges they are currently facing but are approaching them with the idea that they can overcome any obstacle. The cherry on top of this great cover is the background: the red smoke-like effect rising up from the ground is stunning to look at and very reminiscent of the classic Kirby Krackle made famous by the legendary Jack Kirby. That fun nod combined with the excellent use of highlighting on the title and the logo are even more reasons why this cover is simply amazing.
________________________________________________________

Daredevil #31
And here is the Cover of the Week by Chris Samnee who wins this distinction for the second time. Whereas the previous cover utilized an all-white background, this one does the reverse by featuring an all-black one. The reason? While it helps sell the image that is unfolding before our very eyes, its darkness makes the scene all the more foreboding and dramatic. Daredevil has found himself trapped in a guillotine, a victim of the latest plot of the villainous Jester. Our hero is sweating, hands struggling to beak free as the blade gets ready to be lowered. The main title itself gets into the action as well, positioned on the same angle as the guillotine, almost appearing that it is attached to the rope and ready to fall with the lethal blade. But that is not the most interesting part as that belongs to who is positioned around the villain. Jester is sitting on his throne, using Daredevil’s best friend as an arm rest while forcing Daredevil’s former girlfriend, Kirsten McDuffie, to be the one to lower the blade. Both friends have their eyes closed, not wanting to witness what is about to transpire. While the cover is more symbolic in natural, implying that the Jester may use those closest to Daredevil against him, it makes for an interesting image. Can Daredevil keep his friends from harm? Will he triumph over the villain? It compels you to open the book up for answers and like I always say…that is what truly makes a great cover. With that said, Chris Samnee, I award you the first place crown this week. Congratulations!
________________________________________________________

So those are my favourites and it’s a clean sweep victory for Marvel with a five-to-zero showing against DC. What’s your personal favourite covers from the week that was? Comment below!