Okay, so our journey through the past is complete for this week but which covers reign supreme? For Detective Comics, the crown goes to: Detective Comics #699. This is not the Batman we are used to seeing: instead of inspiring fear in the hearts of criminals, he is fearful for his own life. The majority of the cover is flooded in a liquid red substance which strongly resembles blood, something that if true is quite an ominous prospect indeed. Batman struggles to stay above “water”, fighting to prevent his untimely death by drowning. Unfortunately for Batman his limited space is even smaller since the main title is right above him. I love this interaction between the Dark Knight and the title as he tries in vain to push the B and the N of “Batman” upwards and out of the way in desperation. It’s a truly haunting and creepy cover that really strikes a chord in the heart of any fan of Batman’s and one that makes for a really compelling image. For Daredevil, the title goes to: Daredevil #74. The streets have been overcome with utter pandemonium. There is a vehicle that has gone through a storefront, a bus that is almost completely on its side, more damaged windows, and people littering the streets on the ground or staggering this way and that. What is causing such a fuss? Well Daredevil gives us the startling answer: “The whole city’s gone blind!” Daredevil asks his valued friend Foggy for help but he too is not immune to the tragic circumstances that have befallen this good city. Is Daredevil truly the only one still with his sight? What would cause such an event? Who could be behind it? These questions plus the chaotic scene that is unfolding before our very eyes secures this cover as the must see issue of the year. 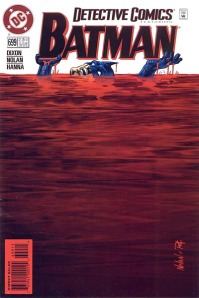