Okay, so our journey through the past is complete for this week but which covers reign supreme? For Flash, the crown goes to: The Flash #184. On the last edition of Retroactive I chose a Flash cover that has been paid homage to over the years and with this edition I’ve done it yet again. The main difference though is that this cover has been paid tribute to in other series as well with the most recent one taking place in the New 52 version of Animal Man. What makes it such an awesome cover though? Well the first thing that grabs us is the giant caption: “You are about to read of the most tragic day in the life of the Flash!” Then we have the image of our hero, completely devastated at whatever has transpired. Last but not least is the black background which not only makes the caption and the Flash pop off the page but creates a real foreboding atmosphere as well. All these elements equate to one awesome and memorable cover that rises above the rest as the best of the best. For Uncanny X-Men, the title goes to: Uncanny X-Men #100. Speaking of iconic covers we have this awesome and classic standoff one. Sometimes we have heroes lined-up against villains but on occasion we have heroes versus heroes like we do here. On one side of the cover is the Original Five (Cyclops, Jean Grey, Beast, Angel, and Iceman) and on the other is the new team (Colossus, Storm, Nightcrawler, Banshee, and Wolverine). Is this some minor disagreement? It certainly is not since the caption boldly proclaims: “X-Man Vs. X-Man in a battle to the death!” A battle to the death? Our minds race as we wonder what could possibly warrant such a conflict. Then we read the rest of the caption “Betrayed by Professor X!” along with the shot of Professor X cheering this battle on. So a battle to the death and a betrayal by their mentor? Why would Professor X want to see his two teams clash? What could he possibly gain? This face-off cover is such a worthy one for the 100th issue and one that really grabs our attention and won’t let go until we open it up and discover the answers to these looming questions for ourselves. 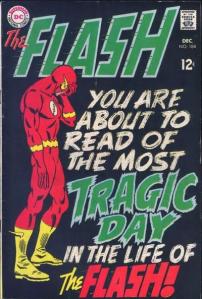