Okay, so our journey through the past is complete for this week but which covers reign supreme? For Detective Comics, the crown goes to: Detective Comics #848. I’m a huge fan of Dustin Nguyen so this year was not only a treat for me but also supremely difficult in choosing one cover over the other. There were so many standout images that I wish I could bestow the crown on multiple covers but eventually I chose this one for multiple reasons. Not only does it contain a wealth of beautifully drawn and arranged images but upon reading the issue you realize that it contains many hints about what is going to unfold inside. Front and centre is the Dark Knight himself, strong and confident, ready to take on all challengers. Behind him, the cover’s background colour is composed of murky browns, browns that eventually form into the image of the latest foe Batman is currently tracking down, the Scarecrow. Meanwhile, the cover has various photos strewn about which feature our story’s other plot involving Catwoman and Hush. One photo features Catwoman apparently sleeping peacefully albeit that is far from what is actually transpiring. Another two photos show Hush, one with the bottom part of his bandages gone, a stitched scar peeking out from behind the main title, while the other shows the upper portion of his face, surgical pen markings mysterious drawn upon him. Littered about the cover are various surgical implements and the real reason why they are prominently shown is one of the major revelations that this storyline has in store for us. Finally, there is the heart, a seemingly random image that we think could be symbolic of something but after concluding this issue we learn the sinister reason of why it is emblazoned on the cover. A fantastic piece that only grows in value after indulging in the issue’s contents make this the best of the best for me. For Daredevil, the title goes to: Daredevil #200. Leading up to this issue, Daredevil has been hot on the trial of his legendary foe, unable to engage him in a one-on-one battle…until now. We are immediately taken in by the image of Bullseye, lying on the ground, his head cranked at a chilling angle, his one arm convulsing in pain. The motion of his hand tells us that he is in fact still alive but that angle of his neck could hint that he doesn’t have too long left to go, his mouth gaping open as if he is letting out a blood chilling scream, his eyes bulging out from the intense pain. Behind him stands our triumphant hero albeit a hero who has undergone quite a fight looking at him. Daredevil’s costume is torn in multiple places, fabric hanging, his arm is adorned in a cast, and his baton is speckled in blood. That his face is covered in shadows makes him appear almost like a demon and the fact that we can’t read his facial expression, whether he be happy, remorseful at what he has done, or just plain exhausted, adds that extra dimension to the cover and makes us wonder: Are we witnessing the loss of life by Bullseye and the loss of Daredevil’s very soul in the process? 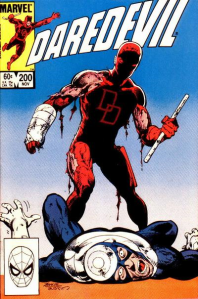