Okay, so our journey through the past is complete for this week but which covers reign supreme?

For Legends of the Dark Knight, the crown goes to: Legends of the Dark Knight #18. What is going on here? Batman sits dejected in his chair, his cowl and cape placed off to the side revealing a mighty beard on his face. He is obviously troubled as is evident by his posture but the reason  why looks to be traced to what he is pouring out of a bottle beside him: strength-enhancing Venomous drugs. How do the drugs and Batman connect with one another though? And what about this passage of time, this inactivity by the Dark Knight? If Batman was going out every night he wouldn’t have let his beard grow out like that. If Bruce Wayne was still a public figure he wouldn’t be caught dead looking like that. No it appears that he’s been neglecting his duties and this fact is backed up by the various cobwebs strew about the cover. What would drive Batman to abandon his crusade? What would drive him into isolation? That question rattles around in our heads but what truly captures our attention is the overall dramatic scene playing out before our eyes, a scene that is accentuated by the stark white background, and a scene that will stay with us long after the issue has been read. 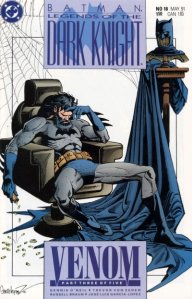 For Daredevil, the title goes to: Daredevil #287. “And in this corner…Daredevil.” At least that is what the title says but Matt Murdock appears to be foregoing his heroic alter ego much to everyone’s surprise to take part in a boxing match though he can never be seen as a normal boxer due to his lack of “sight.” So what does Matt do? Well he dons a red blindfold and enters into the ring anyways, something that would surely give his opponents a false sense of security. Besides the awesome shot of Murdock standing stoic in the ring, I love a few other elements of this cover. I love the angle utilized, how it creates the illusion that we are a bystander to the action peering though the ropes. I also love the use of the all-black background which adds to the gravitas of the cover while causing the whole image to pop off the page. Adding all those elements together combined with the giant question of why Matt is becoming a boxer in the first place and we get a cover that delivers the knockout blow to all the others to emerge as the undisputed champion.