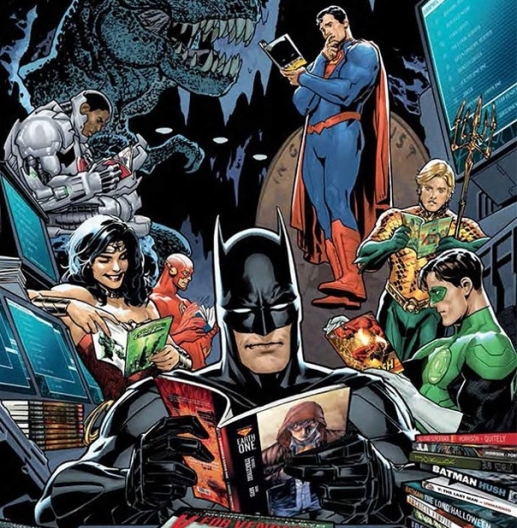 Before we get into the review for this week, I’d just like to say how thrilled I am to be able to contribute to The Speech Bubble. Our dear host GothamRogue has been kind enough to allow me to write a weekly comic book review for the site, and I’m excited to share my thoughts with you each week.

“But Reid,” you ask, “How will you pick which comic to review each week?”

Simply put, over on Modern Mythologies (my website, which I am now shamelessly promoting) I always select a Pick of the Week – the comic I’m most excited to read of those on my pull list. That comic is the one I will be reviewing over here. I sure hope you enjoy DC!

So without further ado, let’s get to this week’s review!

Ever since Forever Evil, Jeff Lemire has taken the now defunct Justice League of America and thrust the group into the wild and cosmic unknown of the wider universe. In many ways, Justice League United has been an homage to the League’s far-flung space adventures of the Silver Age – some of the very books that inspired a love of comics in me. And while the book’s first arc certainly introduced this homage, the current “Infinitus Saga” storyline has taken the chaos and fantasy of the Silver Age to a whole new level by teaming the Justice League United with the Legion of Super-Heroes.

In brief, the Legion has come back in time to stop Byth from turning Ultra the Multi-Alien into the universe destroying Infinitus, who has all but wiped out the United Planets of the 31st-Century. The arc has seen the two groups at odds over how to prevent this future (to kill or not to kill) and also united against Byth. All in all, it has been an action-packed arc thus far, which makes the beginning of this issue so jarring.

Justice League United #8 interrupts the cliffhanger of the previous issue – a mind-controlled Hawkman taking on Mon-El, Supergirl, and the Martian Manhunter – to give us a glimpse of the grim future from which the Legion hails. This is the first time we’ve seen the 31st-Century since the end of the Legion’s own title years ago, and Lemire is wise to give readers this opportunity to catch up not only with the team, but their home and time, where Dream Girl and other Legionnaires are fighting a desperate losing battle against Infinitus.

Though the remaining Legionnaires eventually travel back in time to join their comrades and the JLU, what this interlude provides is some much needed context. When Mon-El first appears in the present and declares that Ultra (currently a child) must be killed, it was easy to paint the Legion as having lost their way. But finally putting a visual to the destruction and death they have described now raises questions about whether the fate of the entire future is in fact worth sacrificing a single life.

Artistically, Justice League United has been solid, if not a little too adherent to DC’s in-house style. What does separate this title from others, however, is the vibrancy of Jeremy Cox’s colours, which manage to do what Neil Edwards’ pencils do not; that is, match the insane energy of Lemire’s story. In fact, Cox is the only artist on the issue who seems to capture the explosive scale of outer space and cosmic beings in a way that honours the Silver Age legacies of both the League and the Legion.

For all the fun I’ve been having reading this title, I feel like I’m waiting for the seams to tear. Lemire’s runs on solo books such as Green Arrow and Animal Man have been phenomenal, but Justice League Dark (his last team book) was a disappointment because he struggled to keep characters and subplots balanced from issue to issue. As the arc speeds toward its conclusion, I’m as eager to find out the fate of the Legion and the 31st-Century as I am to gauge the narrative health of a title I desperately want to see succeed.