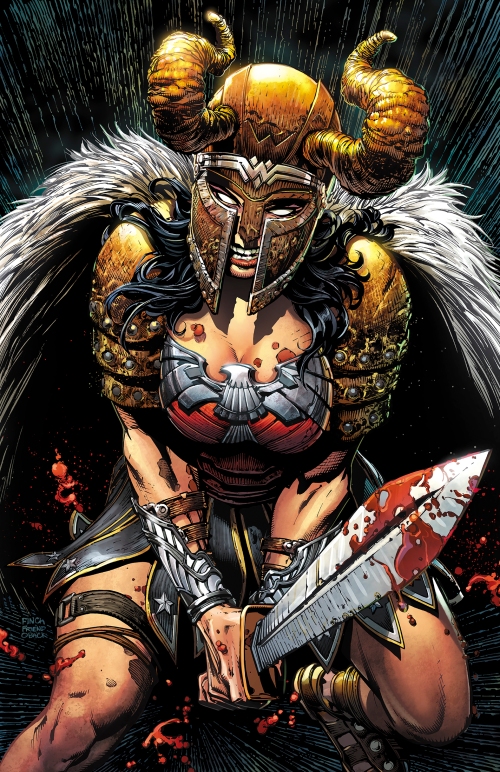 Let me start this review off with an apology.

Recently, I have slipped into a horrible habit. I find that I am frequently caught in the trap of the “lazy reviewer”; that is, constantly comparing the work of one creative team against the work of a previous team on the same title. This sort of thing is especially apparent following a run of critically strong storytelling and artwork. I’m guilty of the comparison after the Lemire/Sorrentino run on Green Arrow, and I most certainly have been guilty of it in the wake of Brian Azzarello and Cliff Chiang’s triumphant run on Wonder Woman.

It’s lazy reviewing, and it stunts one’s appreciation of the new creative team’s approach to the title. And I apologize for it. In fact, this month’s issue of Wonder Woman is precisely the reason I am apologizing.

In Wonder Woman #38, Meredith Finch continues to dig deeper and deeper into the weight and strain of the responsibilities Diana has placed on herself. She is an absent Queen of the Amazons, a distracted member of the Justice League, and a God of War who has not yet come to terms with all that title entails. We’ve seen the seams begin to tear in terms of Diana’s relationship with the Amazons, but this issue highlights both the concern of the Justice League (namely Batman) and herself as Diana comes to grips with her true identity.

And identity is what the character of Wonder Woman has always been about. What it means to be female, to be a warrior, to be a hero, and to be a leader have always converged in her character, and Finch’s script succeeds in once again placing Diana in the position of having to decide what she will become. This choice is made all the more difficult by information revealed by Hessia: that being the God of War is more than just a title. Diana is now War incarnate, placing her people and her friends at considerable risk.

David Finch’s art does a great job of demonstrating the potential horror of this revelation, in particular capturing Diana’s fevered dream of a massacred Amazon nation. His work in dehumanizing the “War” aspect of Diana makes Hessia’s speech later on resonate all the more strongly. Diana is a powerful and brutal warrior, but without the compassion and love she represents she could prove a more dangerous deity than Ares.

Where the issue stumbles is in the portions away from Paradise Island. Diana’s dialogue becomes predictable and overly confrontational (it occurs to me that this may be the point, but her stubbornness reads more like arrogance than it does succumbing to “War”). Likewise, the artwork fails to find much energy outside of the initial dream-sequence. Finch is a master of grandiose action, so two-hander scenes of characters actually conversing seem to give him a hard time.

Overall, however, what this issue has proven to me is that my initial reservations about the post-Azzarello/Chiang era were misplaced. Wonder Woman will never look and feel as it did with them as the team, but the Finchs are proving that they’ve been paying attention to the direction the book has been taking Diana. Moreover, they are bringing Diana’s dual life of public superhero and mythological being together, the proximity of which only raises the stakes as Donna Troy is positioned to replace Diana entirely.