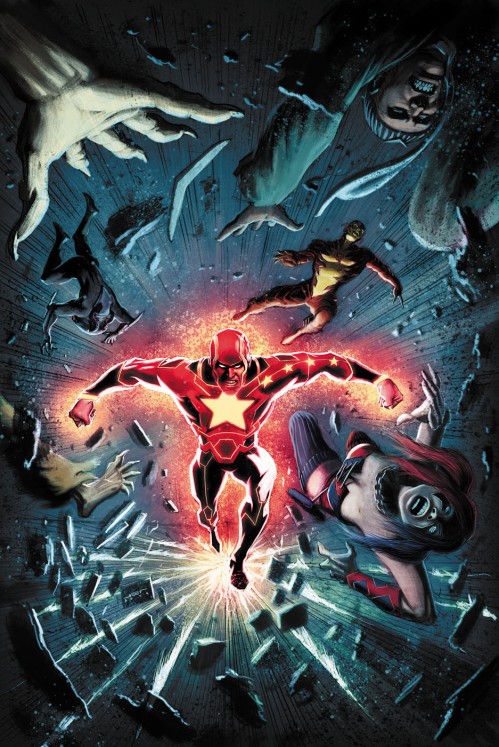 Suicide Squad was one of those New 52 titles that struggled to find its feet. Though never stumbling so badly as to get cancelled, it was never one of the best books of the line, despite the team’s long and storied history and the critical success of previous incarnations of the title. The book 100% lost its way during Forever Evil, when its tie-in storyline failed to resonate at all on its own merits, let alone in the context of the wider event.

But since the Crime Syndicate’s defeat at the end of Forever Evil, DC relaunched the team under the name New Suicide Squad: a move which has proven to be one of the quieter successes of the New 52.

Over the course of the first few issues of the title, Amanda Waller and Task Force X have faced what some may call an existential crisis, a narrative parallel to the team’s own New 52 problems. There are new governmental pressures on Amanda Waller – including an aggressive new superior in Vic Sage – and the Squad’s roster has continually rotated as Waller and Sage struggle to find balance in a team of supervillains under duress. Squad mainstay Deadshot has been sidelined with crippling injuries and new members Black Manta and Reverse-Flash are still acclimating to their new roles.

In New Suicide Squad #7, all of these factors have come to a head as the team attempts to outrun an escaped metahuman – the sole survivor of a rogue Chinese military experiment the Squad was meant to destroy. With Reverse-Flash injured, the team attempt to hide in a ghost town replica of Metropolis only to have their metahuman pursuer find them and bring the city crashing down around them.

Sean Ryan’s script has managed to right the listing ship that was the Suicide Squad, bringing the team back to basics: complex covert operations without nearly enough training or preparation. He also very deliberately incapacitates members of the team who are too over-powered. He turned Deathstroke against the team in the first arc, crippling Deadshot took out the team’s premier marksman, and the Reverse-Flash’s already limited super-speed is rendered null and void after blowing his knee out last issue. This reframes the book from being about superheroes and supervillains to being about unlikely soldiers on impossible missions. 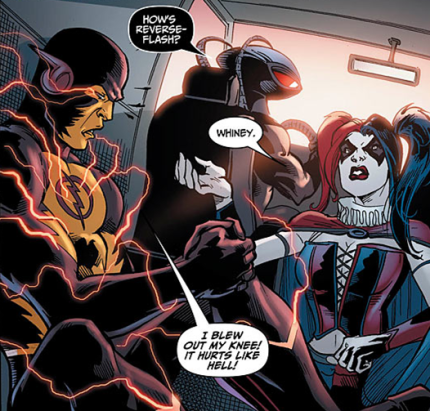 This issue also succeeds in giving its wide cast of characters just enough page time to explore their various psychoses and afflictions. From Deadshot’s apparent PTSD to Harley Quinn still existing in the shadow of the Joker, Ryan finds ways to humanize the supervillains who make up the team. In what I consider to be the strongest sequence of the book, he explores Black Manta’s motivation for joining the team, his obsession with Aquaman, and how he has coped with the aftermath of the Crime Syndicate’s invasion.

Artistically, the issue still falters a bit. Hunter and Cifuentes’ pencils are particularly inconsistent. The clean lines and figures of one panel become the misshapen faces of the next. The escaped Chinese metahuman is one of the worst victims, although Harley Quinn is likewise variable in terms of the quality of her visuals.

That being said, the art does manage to match the danger in Sean Ryan’s script. The entire issue, and especially the final few pages, place the entire team in the crosshairs not only of their intended target, but also editorial. Between this issue’s solicitation promising a member would not return from the mission, and the reveal of the new line-up of the Suicide Squad (which, of course, was missing far more than one of the current members) I think it’s fair to say that the stakes – another key component of the historical success of the Suicide Squad – have never been higher.

I’m not sure very many people have either given this book a chance or realize just how good a title it is becoming, but after this week’s issue, New Suicide Squad is in no risk of being dropped from my pull list anytime soon.