You know when you have been writing an ongoing column a certain way, with formatting you have crafted to be clear and pretty and intelligible?

Well, have you ever encountered a situation that throws all of your lovely formatting out the window?

Turns out that reviewing a comic book featuring three distinct stories does exactly that. Buckle up while I work my way through Secret Origins #10 by reviewing the stories not in the order they appear, but in a way that allows me to finish with the one on which I want to spend the most time and energy. 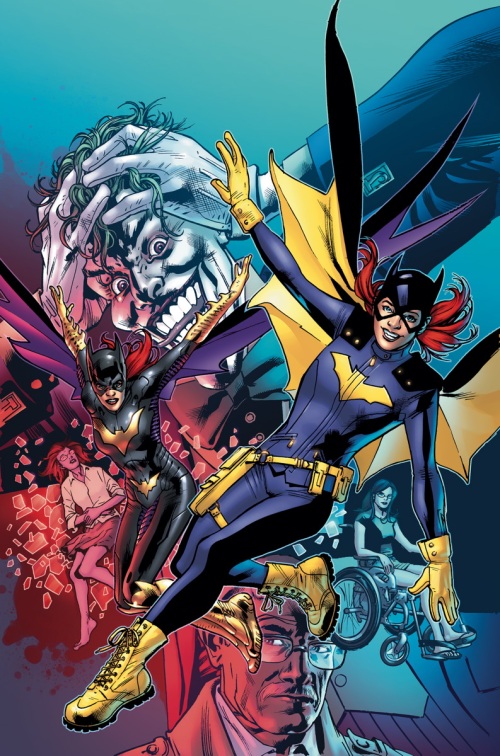 From the very first appearance of the character, the mythos of Firestorm has been obsessed with duality. This makes sense, given that the character is literally the fusion of two people into one. But unlike the deep philosophical questions of duality posed by a character like Batman, Firestorm has been plagued by oversimplification. Kind but dumb jock Ronnie Raymond and brilliant but flawed professor Martin Stein.

In the New 52, the eventual pairing of Ronnie Raymond and Jason Rusch becomes the character’s official origin, and though, once again, the characters personify the body and the mind, respectively, “The Secret Origin of Firestorm” fails to bestow the mythology with any more depth than the character’s first appearance nearly 40 years ago.

Written from the perspective of a mutual friend of Ronnie and Jason, Dan Jurgens’ story spends far too much time dwelling on the jock/nerd binary and practically no time at all on the real essence of the character – the conflict between opposing perspectives and ideologies within the context of a living nuclear reaction. In fact, after spending nearly the entire story emphasizing their differences, one panel abruptly announces that the two personalities became friends. Without ever examining that process, or highlighting the potential danger had they failed to reconcile, this conclusion – and therefore the entire story itself – feels both contrived and pointless.

Sean Chen’s art is pleasant to look at, especially in those far too few panels of real action. Paired with inker Mark Morales and colourist Romuld Fajardo Jr., there are some incredible panels and pages that demonstrate the vast and potentially limitless power of Firestorm. In particular, the splash pages featuring Fury – a confusingly redundant addition to the character’s New 52 mythos – are loud and explosive, capturing the essence of the words “fury” and “firestorm”.

Overall, though, I found this story to be a rather surprising disappointment. Jurgens missed an opportunity to expose the real meat of Firestorm, but all of the character’s complexity and nuance is overlooked and replaced with easy clichés.

Secret Origins hasn’t spent much time on supervillains. In fact, of the thirty stories now published across ten issues, “Green Savior” marks only the third to feature a villain. Luckily for us, that villain is Poison Ivy.

I know that Batman and his mythos are far too overexposed (as you will see in a few short paragraphs when I move on to the Batgirl feature), but there has always been something attractive about Poison Ivy. Having now written that sentence, I do see the double-meaning, but what I am talking about is the attraction to her complex relationship to both the Green and to her own role within society.

Christy Marx is wise to anchor this origin story in both of those realms of ambiguity. As Poison Ivy mind-controls the head of Descanto – a corrupt and unscrupulous agri-business who had been exploiting an organic farmer – she acquiesces to a request to learn more about her. In this framework, and her own telling of her origin, all of the key components are in there: the eco-terrorist, the environmental hero, and the spurned scientist made powerful by an accident of her own making.

But what I love most about this story are the parallels to the origin of the Swamp Thing. Both were environmental activists, both were scientists, and both were victims of attacks which exposed them to their own bio-chemical concoctions, connecting them to the Green – the collective consciousness of all botanical life. Poison Ivy even refers to herself as “Guardian of the Green”, and though her formal affiliation with the Green is seldom concretized, this issue does a tremendous job of positioning Poison Ivy as the mirror to Swamp Thing. Where the latter is plant life convinced it is still a man, Poison Ivy willingly sacrifices the lives of humans in favour of her beloved plants. 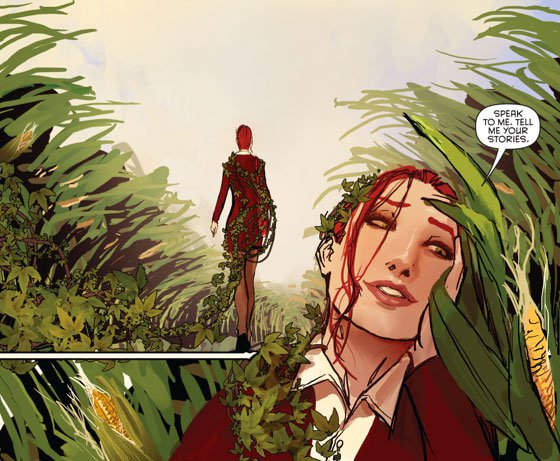 Stjepan Seijic varies the colour profiles of different stages of the story, but always manages to keep the visuals tied to nature. From the lush greens and reds of Poison Ivy herself, to the more autumnal palette of the Descanto office (fitting, given the company’s impending death, literally and figuratively), the artwork in this story is delightfully organic. Moreover, Seijic honours the complexity of the character by keeping the visual focus on natural themes and away from the less interesting “femme fatale” angle.

Don’t get me wrong, Poison Ivy is still undoubtedly sexy, but what really shines through in this story is her single-minded devotion to nature.

This is the one I was really excited about.

One of the big mysteries of the New 52 has been whether or not Barbara Gordon was ever Oracle. We do know that the events of The Killing Joke remain canon and that she spent time paralyzed from the waist down. We also know that an experimental surgery gave her back the use of her legs and she returned to her role as Batgirl. But in the Batgirl-interregnum, we never got a straight answer about the existence of Oracle.

In her solo series, Barbara has come up against an adversary who claims to be the real Batgirl, and a potential key to unlocking that mystery has shown up in this origin story. Cameron Stewart and Brenden Fletcher have made a rather unorthodox move, making their Secret Origins story into a bit of supplemental storytelling for their current arc. But given the shocking nature of that story, it actually makes perfect sense.

“The Algorithm” starts off in a relatively safe direction. It reads like a standard Secret Origins story: this is who I am, this is how I got here. Where it jumps the tracks and becomes a chapter of the “Batgirl of Burnside” arc is, appropriately enough, right at the moment where the New 52 introduced questions about Batgirl’s past.

The story proposes that as part of the experimental procedure to heal Barbara’s spine, a comprehensive, digitized brain scan was conducted. Confined to a wheelchair and frustrated, Barbara uses her incredible computing skills to turn this digital version of her own brain patterns into an algorithm that can identify crimes before they happen. What we learn, as readers, is that this algorithm – this digital version of Barbara herself – is our narrator and that everything we have seen of New 52 Batgirl is not a part of her memories.

In essence, what Stewart and Fletcher are proposing is that the “true” Barbara is Oracle. Well, not explicitly. She is the ghost in the machine forced to watch someone else live her life, wear her mantle, and fight her battle. Or is she?

But this current arc has churned up so much interest that I began reading about it. And now, having read “The Algorithm” I am back-tracking and reading the heck out of this thing. This is brilliant. There is something so deliciously meta about pitting the New 52 Batgirl against what is essentially the pre-Flashpoint Barbara. The editorial decision to make her walk again was a controversial one, and the character has been torn between the two very different sides of her heroic identity – the mind and the body. And unlike the Firestorm story, Batgirl’s Secret Origin installment is rife with complex questions, gripping twists, and incredibly high stakes. The very soul and spirit of Barbara Gordon hangs in the balance.

I haven’t really touched on the art, but that should not be read as a slight. The team of Irene Koh and Hi-Fi brings a kind of cold vibrancy to the digital lens through which the story is told. But, quite frankly, the intrigue and questions posed by this story thoroughly overshadow the artwork. I’m not sure where the “Batgirl of Burnside” arc is going to end, and I’m not sure that it matters if it goes the way I think it’s going, but “The Algorithm” is an exceptionally crafted chapter that clouds as much as it clears.