Comic book writing sure has changed from the Silver Age. In the 50s and 60s, nearly every comic book published was a one-and-done or a two-shot story. There were no sweeping arcs over five, six, seven, or more issues. There was no expectation of collecting issues into trade paperback and hardcovers to be sold as complete stories. Of course, this meant that Silver Age superhero stories seldom had the complexity and depth of their modern-day counterparts, but there is something much more liberating in writing quick, concise adventures.

This is why Action Comics #40 is such a breath of fresh air.

Much like last year’s Flash #26, Greg Pak and Aaron Kuder’s one-shot story is something straight out of the Silver Age – a brief, action-filled adventure that fills each panel and page to the bursting point, instead of dragging it out over the next few months.

Pak’s script – entitled “Mirror Cracked” – begins with the Man of Steel inexplicably transported through the Multiverse to Earth 29, otherwise known as the Bizarroverse. Landing on the cube-shaped Bizzaroworld, Superman encounters the planet’s eponymous hero, engaging in a battle that is as much about misunderstandings and miscommunications as it is punches and kicks. After briefly teaming up against Bizzaro-Metallo – ironically, the only logical and sane (by our standards) inhabitant of Bizzaroworld thanks to his computer brain – Superman and Bizarro face off against Doomsday, who has also found his way to Earth 29. Infected with the Doomsday spores, “Doomzarro” rampages through Bizarroworld, spreading flowers and bunnies wherever he goes – a rather brilliant inversion of Doomsday’s life-force leaching power from Superman: Doomed. Flying into the sun (also a cube), Bizarro rids himself of the Doomsday spores and saves the day, finally becoming “worst friends”.

This issue is an absolute delight. The wackiness and fun of Bizarroworld shines through in both Pak’s dialogue and Kuder’s art; the former gleefully embraces the nonsense logic of Bizarroworld’s opposite-speak, while the latter revels in the twisted features and joyful mayhem of the world and its inhabitants. Moreover, Kuder brilliantly contrasts the gnarled visages of Bizarro and his universe with the clean lines and proper proportions of both Superman and Doomsday. They could not stand out more clearly, in a visual sense, which plays very cleverly against the traditional Bizarro story, in which he is the odd one out in a world of order and sanity.

There is much more to both the art and the script than I can delve into here – magical little touches like entrance signs that read “Go Away”, the wildly destructive and ineffective Injustice League, and an infected Bizarro saying things like “Me…feel pretty good…nothing…weird going on here at all.” 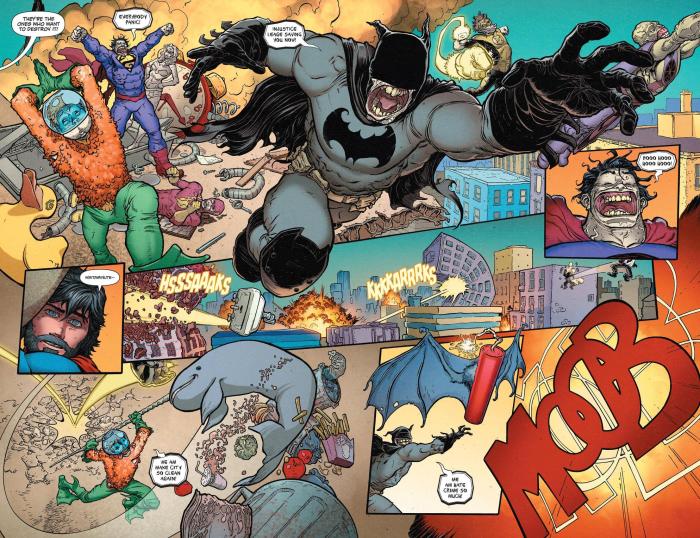 But returning to my opening remarks, what struck me most about this issue was how deeply Pak and Kuder understood and respected this version of Bizarro. Long before he was a failed Superman clone, Bizarro was a strange inversion of the Man of Steel, designed to pastiche his image of perfection and infallibility. He’s not the restrained boy-scout, he’s the unleashed boy; a child running around with the powers of a god.

Perhaps the best example of this kind of subversion is in the insanely fast “Doomzarro” portion of the story. Superman: Doomed took two one-shots, three existing titles, and a handful of writers and artists over a period of several months. The entire arc of that story took Bizarro ten pages, and I love that Pak has the good humour to poke fun at his own work in this way. He even unceremoniously strips Clark of his “Horrorville” beard. Nothing is sacred, and everything can be lampooned: this is the essential quality of the Silver Age Bizarro.

And like many of the best Silver Age stories, “Mirror Cracked” does not require months and months of issues and tie-in titles to complete. It is short, simple, and above all, sweet. Every panel is infused with a fun and joy and silliness that is becoming increasingly hard to find among the Big 2’s primary titles. I can only hope that DC’s soft-reboot in June will make good on its promise of “story over continuity” and find more ways to rediscover the fun of superhero comic books. And based on this issue, I think that Bizarro’s upcoming mini-series will be a great place to start.