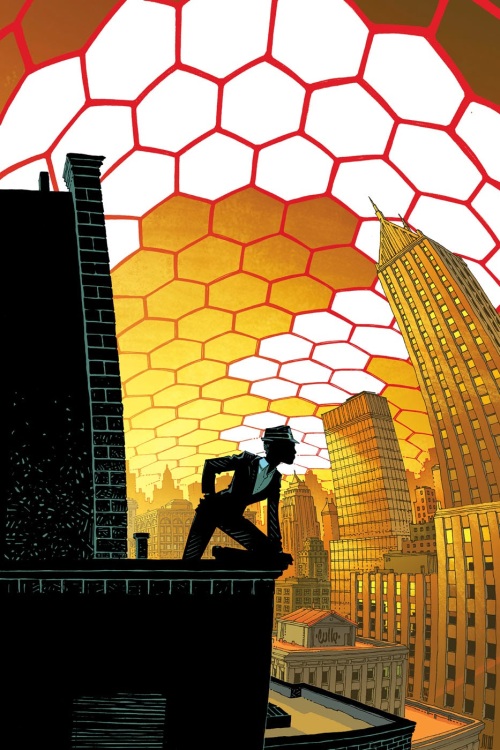 Gotham City is used to being cut off from the rest of the world. “No Man’s Land” is still relatively fresh in the minds of readers and residents alike as the pre-Flashpoint Gotham is once again isolated, this time in the form of a Brainiac dome. But where Convergence: Nightwing/Oracle shone a light on the resilience of the city and her citizens, Convergence: The Question reminds us that this is still Gotham, and that when the chips are down, the people can become animals.

As the action opens on Greg Rucka and Cully Hamner’s sombre and desperate window into domed-Gotham, Renee Montoya reflects on this very theme, specifically calling back to “No Man’s Land” and comparing the citizens of the city to rats in a cage. The narration underscores an altercation between three armed looters robbing a pharmacy and Two-Face, who has been considerably more Harvey Dent-like since the dome fell. After he subdues the looters, he finishes breaking into a safe containing morphine, which he then hands off to Montoya so that she can bring it to the supply-starved hospital where her father lies dying.

This is the Gotham that Rucka wants us to see – the grimy scavenging and threadbare social order of prison, not the hopeful determination of the Nightwing/Oracle or Batman and Robin one-shots. Rucka’s script is loaded not with the danger of battle or of Telos’ grand designs, but with the threat of existential dread; of the desperation and cabin fever coursing through the veins of hero and villain alike. Hamner’s art mirrors that internal desolation, with a majority of panels featuring a plain, single-colour background. Paired with colourist Dave McCaig’s muted hues, the book is filled with the signs of a city, people, and society in slow decay.

This angle suits the tone of the Question perfectly. As a character, the Question thrives in the muck. Well before Montoya inherited the mantle, Vic Sage’s Question fought crime and corruption in Hub City – a city so perversely immoral it made Gotham look like a haven of justice. When Renee Montoya took on the trench coat and faceless mask of the Question, she also took on the worst side of the underworld; Intergang and the Religion of Crime embodied some of the worst aspects of humanity, and now with the dome down and Gotham in a state of perpetual isolation, it is the perfect moment for Rucka to return to this character.

Admittedly, this issue lacks what seems to be lacking across all of the tie-in #1s; that is, any significant action or narrative progression. This is to be expected, as we must reintroduce ourselves to these lost timelines and continuities and learn what has happened to them in the time since they were abducted by Brainiac.

In the case of The Question, the two narrative focal points are Renee Montoya and Harvey Dent. For the former, we get a small glimpse of her life with Helena Bertinelli – aka the Huntress. The most significant development we learn about is that since the dome cut off the city, Montoya no longer bears the sinful Mark of Cain she acquired in the Final Crisis. When the Huntress comes home and Montoya begins her “shift” as the Question, she visits Two-Face who has been likewise affected by the dome. Every time he has flipped his coin since the dome went up, it has come up heads, as if the dome has cut off his connection to chance and luck the same way it has cut off metahumans from their powers. It’s what has prevented him from committing suicide night after night and part of the reason that he has adopted a more heroic persona in the domed city.

If there is one thing that feels truly out-of-place in this book, it is the complete lack of mystery. The characters are clearly defined, as are their relationships to each other, and by the end of the issue, Rucka has set up both the conflict coming in issue #2 and the characters trying to stop it. But at this point, it’s all laid out too cleanly and essentially boils down to stopping something they all know is coming. For a story centred on the Question, all of the answers are far too within our reach, and this feels like a pretty major oversight.

Overall, the book is very enjoyable. Hamner’s art is the right combination of precise and bleak, supporting the sombre tone established in Rucka’s script. But while those tonal and thematic elements are all competently put in place, and it is absolutely refreshing to reconnect with these characters and this continuity, I am left to wonder if there is going to be a question in this tie-in worth solving.