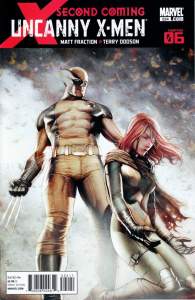 Uncanny X-Men #524. This breathtaking image tugs at the heartstrings while also getting our collective interest piqued. Hope kneels down, devastated over some event that has just transpired, an event that, if you had been following the series, is the death of Nightcrawler who sacrificed his life to defend the young woman. She is an emotional wreck, blaming herself for Kurt’s death, as Nightcrawler’s good friend Wolverine comes up from behind. He places one hand on her shoulder as if to console her but with the other he unleashes his claws. What is going to happen? Is Wolverine going to impale Hope for causing the death of his good friend? Hope seems content with what is going to come her way, feeling that she is going to get what she deserves. Whether Wolverine will follow-through is the big question as he is visibly conflicted. The background further elevates the scene with the haze moving in and the leaves falling which symbolize not only the fall of a X-Man but the coming of a new season, a new phase in the lives of our favourite mutant family.

And that concludes our look back at Uncanny X-Men. As I mentioned, I’m eager to hear what everyone else thinks so leave your selections for each decade below. Remember there is no right or wrong answer – only many, many, awesome covers.

One thought on “Retroactive Special Edition: Uncanny X-Men Through The Decades”