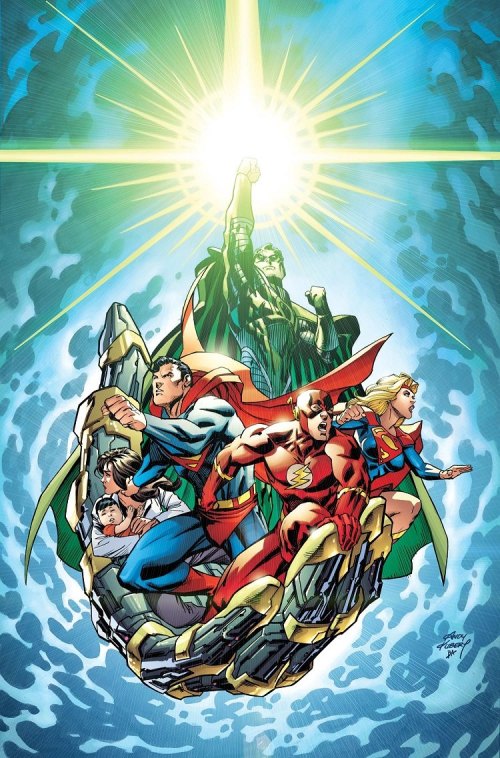 This year marks the 30th anniversary of Crisis on Inifinite Earths, the first major company-wide crossover in mainstream comic books. The cosmic catastrophe destroyed nearly every one of the infinite worlds of the Multiverse and merged the remaining five into a single continuity, forever changing the trajectory of the DCU. It was a landmark event in both narrative and publication, and Convergence – while also a stop-gap event as DC moves offices – is designed to pay tribute to the lasting legacy of Crisis.

Which is precisely why the final issue bothers me so much.

Convergence #8 picks up right where we left off: Parallax has killed Deimos, releasing all of his stolen temporal energy back into the planet, threatening a detonation that could shatter the entire Multiverse. As a desperate last move, Booster Gold, Goldstar, and Waverider release the multiversal Brainiac from his T-sphere prison in the hopes that he can reverse the damage which, surprisingly, he does.

Brainiac’s motivation is to return to his true form, long lost as he transcended both time and space following the events of Flashpoint, travelling backwards through the various Crisis events and mutating into the monster he has now become. As Brainiac attempts to return all of the cities to their respective worlds, the sheer magnitude of the cataclysm of the first Crisis prevents him from his task. He states that the first Crisis must be prevented entirely or the Multiverse will collapse once again – sending various pre- and post-Crisis heroes back to stop it. They are successful and the day is saved.

But at what cost?

In terms of the narrative, very little. Though the pre-Crisis worlds were saved, the current continuity remains intact – explained as an evolution of those original worlds. Fair enough. As far as the internal logic of comic books is concerned, this is as fair a rationale as any. What bothers me is that what writers Jeff King and Scott Lobdell have done is use Convergence, a book designed to pay homage to the anniversary of Crisis on Infinite Earths, to erase that iconic event entirely. It no longer exists. Perhaps even worse than that is how the script’s assertions that “each world has evolved, but they all still exist” now shoehorns the legacy of those lost continuities into the current. Instead of being allowed to chart its own course, the current continuity is thrust into the shadows of those past; the old timelines are literally depicted as spectres hanging over the new ones.

Overall, having to set up and explain the various continuity-related plots bogs this issue down. There is very little action, if any at all. It’s mostly just heroes standing around and talking. The saving grace is the stellar artwork created by a veritable legion of pencillers, inkers, and colourists. In particular, the four-page spread of the merging of continuities is quite striking, even if the subject matter didn’t sit well with me.

But the biggest positive for me comes after all the multiversal upheaval is over. With Brainiac gone and Telos at peace, the planet itself is transported to Earth 2 to serve as those characters’ new home following the destruction of their own Earth during World’s End. There is hope and joy and promise in those few final pages, and though the sneak peek of Earth 2: Society proves that their new home will have problems of its own, it is so refreshing to see thing finally go well for the people of Earth 2.

In the end, the things I loved about Convergence as an event were absent from the final issue. The pace was slow, there was no action, the story was overly convoluted, the characterization faltered, and though technically it “changed everything”, all it really succeeded in doing was aborting the very thing it was meant to celebrate. I am not frequently disappointed to the extreme that I am with Convergence #8, but hopefully the event’s reverberations in Justice League United and other titles will, in time, soften that opinion.