In case I haven’t made it quite obvious enough, I love it when a comic book’s art does more than simply depict the events of the script. For me, the real magic of comics is in seeing a relationship between text and art, where each feeds into and elevates the other. Even within the context of these weekly reviews of mine, there are a number of examples of issues (Gotham by Midnight, Doctor Fate, Action Comics #40, etc.) in which the marriage of the script and the visuals is what makes the book stand out among its peers.

Black Canary certainly falls into this category. Annie Wu’s artwork is simultaneously clean and visceral, delivering a raggedness that suits the edgy tone of the band while still fitting comfortably within the realm of the superheroic. But in the context of the title’s second issue, the artwork does so much more – it actually keeps the whole thing alive.

Issue #2 picks up in the desert where Dinah is taking her bandmates through some gruelling self-defence training, including hand-to-hand combat and the use of firearms. Her intentions here are good – she wants to help keep Ditto safe from the mysterious organization that seems so interested in her – but this diversion from music to martial arts exacerbates her already uneasy relationship with the band, and particularly with Paloma Terrific. To make matters worse, the band’s former singer Bo Maeve shows up unannounced and Dinah discovers that one of Ditto’s attackers is her husband, Kurt. 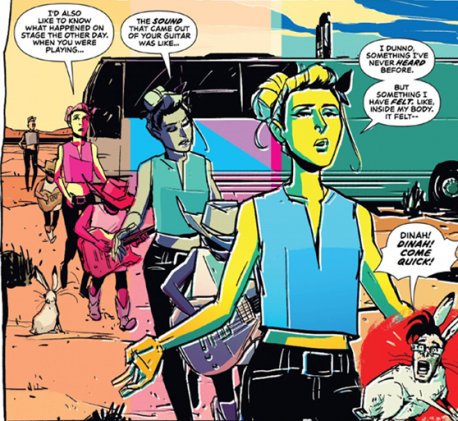 But for all of these developments, Brenden Fletcher’s script has slowed the pace remarkably. Where the first issue was frenetic and bombastic, this issue takes its time with dialogue (perhaps too much so), and interrupts the regular panelling with music journalistic inserts that provide more background on the band and its members. These are wonderful touches that help to flesh out the new context in which Dinah finds herself, and there is still a ton of mystery to characters like Maeve and Ditto, but overall the effect on the script was one of drag.

The mitigating factor, as mentioned at the top of this article, is Wu’s artwork. The sharp lines and aggressive angles lend a sense of focus and purpose to a script that would otherwise feel kind of aimless. Her layouts are crisp and direct and brilliantly capture action sequences. In fact, the issue’s major physical conflict contains almost no dialogue at all, allowing Wu to fully take over storytelling duties, exploring Dinah through physicality. And working in tandem with Lee Loughridge’s astounding colours, this issue also succeeds in building the intrigue around Ditto’s mesmerizing sonic abilities. As the colours shift from the desert yellows and oranges to otherworldly greens and pinks one gets the sense that Ditto is tapping into a world beneath, peeling back the layers of reality through music.

Black Canary is a great book. It’s fun and fascinating and refreshingly off-beat, and much of that is owed to the interplay between Fletcher’s words and Wu’s art. But in issue #2, Wu wins out and buoys a dragging script.