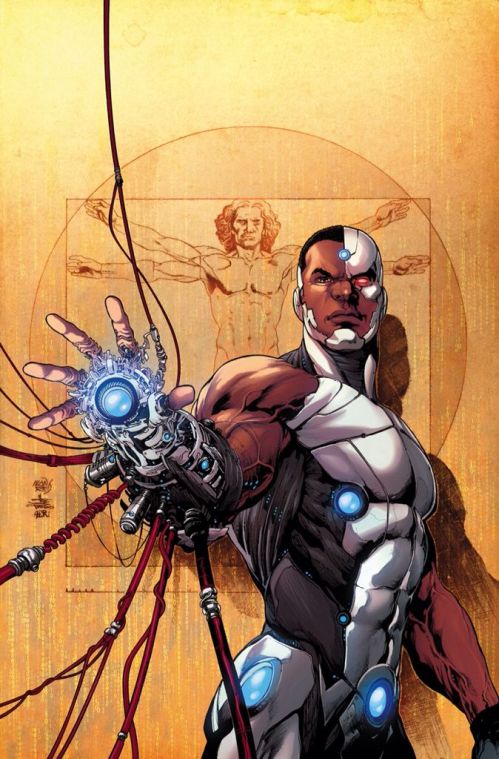 It’s hard to believe that a character as popular as Cyborg, who has been a member of two major superhero teams (the Teen Titans and now the Justice League) for the better part of 30 years, is only now getting his first-ever ongoing solo series. He has been featured before in a six-issue limited series, but otherwise, this week’s Cyborg #1 is a first for the character.

Written by David F. Walker and drawn by Ivan Reis, the debut issue of the new series finds Victor Stone returning to S.T.A.R. Labs in Detroit where he seeks the help of his father in understanding the latest unexplained changes in his technology. As Vic replays footage from a recent battle, it is revealed that he was both dismembered and killed before inexplicably returning to life and reassembling/repairing himself. This development ties in to his new look, which is even more streamlined than after his rebuild during Forever Evil, and in which his body seems to alternate between metal and skin.

This primary narrative is intercut with scenes from a war in a far-away galaxy, in which the humanoid Tekbreakers fight a losing battle against hordes of Technosapiens – beings capable of assimilating new technologies and converting their fallen organic rivals into tech-enhanced members of their collective. They are not quite Borg-like in that they seem to possess individual personalities and thoughts, but there are a number of haunting parallels between the two. More disturbing, however, are the parallels between the Technosapiens and Cyborg himself.

Reis’ artwork does a lot of the heavy lifting in terms of tying these two disparate narrative together. The similar compositions of the morphing Technosapiens and Vic’s ever-changing physiology very cleanly sets up the premise of the book’s first arc. That clarity of trajectory frees up Walker’s script to explore the mystery of Cyborg’s technological evolution at a more moderate pace, building some suspense and intrigue as well as allowing for time to focus on the various character relationships. The strained dynamic between Vic and his father has been especially well-trod in recent years, but in S.T.A.R. Labs researcher Sarah and former high school football rival Sebastian there is potential to add some depth to Cyborg’s solo mythology, which for a hero of his standing and popularity is remarkably thin.

In general, this issue feels well-paced and intriguing, but there are aspects of Walker’s writing that make me a little bit wary. There are a couple of moments where the dialogue gets unbearably clunky. In the opening scene – showcasing a stand-off between the Tekbreakers and the Technosapiens – this is an actual exchange of dialogue:

In the span of sixteen words, the word “die” shows up three times. At best, this exchange feels uninspired and falls flat. At worst, this could be an indicator of a general weakness in dialogue that threatens to undermine Walker’s otherwise interesting story. The second half of the story has a similar problem, where Vic’s narration about being ignored as a child, while resonant in that moment, is made almost entirely redundant by the same thing having been said by Sarah pages earlier. Granted, the narration puts this situation in the context of Vic’s entire life, but that fact remains that the script already established that Vic’s father is more concerned with his experiment than his son, and the narration through the second half of the book wastes valuable page space and storytelling time doubling back to reiterate the point.

All that being said, I think that Cyborg #1 is a great debut for the character’s solo career. It intrinsically ties Cyborg to his first major threat, it promises to be both character driven and expansive, and best of all there are wonderful reminiscences of the character’s earliest incarnation, from Reis’ sleek redesign to hints of the inner anger that defined Cyborg during his time with the Teen Titans. It took 30 years, so I hope that this book will finally give Cyborg a purpose and a following separate from the teams in which he is featured.

One thought on “The Vanier Report: Tales From A DC Pull List (Cyborg #1 Review)”