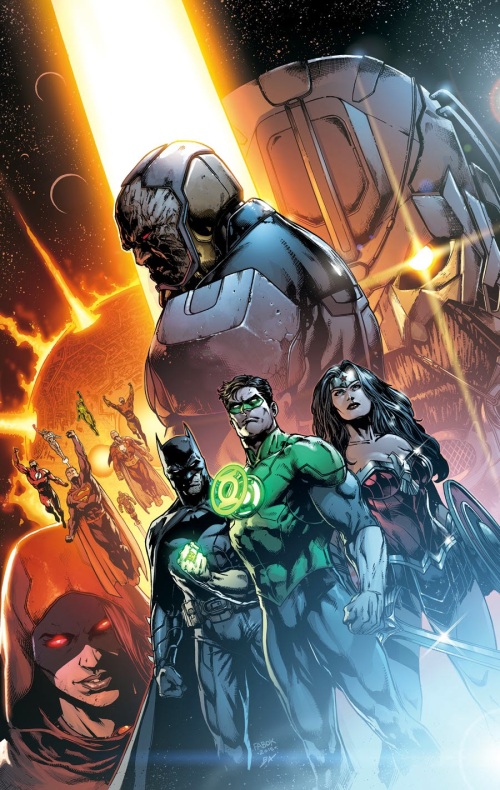 I’m going to kill the suspense right away: I loved this issue.

In the first official chapter to Geoff Johns and Jason Fabok’s “The Darkseid War”, the pair throw everything they’ve got at the reader. At a special extra-sized story, Justice League #41 establishes that, contrary to its relatively simple pitch – Darkseid vs. the Anti-Monitor – this arc is going to plumb the depths of several major characters.

The story is primarily split between three narratives – Mister Miracle breaking into Darkseid’s throne room to uncover his latest and largest war plans; Wonder Woman and the Justice League investigating the suspicious murder of civilians tied to the appearance of Apokoliptian Boom Tubes; and Superman and Lex Luthor at Lexcorp, trying to determine who has been attempting to assassinate Lex. All three narratives parallel each other, in a way, beginning with a sense of introspection and self-examination before grimly and steeply turning to the immediate dangers of the coming war between Darkseid and the Anti-Monitor.

For Mister Miracle, this comes in the form of first coming face to face with Darkseid himself, then his assassins Kanto and Lashina. For Wonder Woman and the League, they face off against Grail – Darkseid’s half-Amazon daughter who uses the new Power Ring to open the interdimensional gateway through which the Anti-Monitor is able to come to Earth 0. As Wonder Woman signals Superman and Luthor for aid, the pair are caught off-guard by Lena Luthor, who shoots Lex and reveals herself to be in possession of a Mother Box, banishing the pair.

What is so wonderful about Geoff Johns’ script is that, despite being able to sum it up rather succinctly (if I do say so myself), the stories of the three primary narratives are wonderfully explorative. This is helpful in terms of getting better acquainted with Jack Kirby’s New Gods who, despite featuring more and more prominently in the last decade, are still relatively obscure characters, Darkseid notwithstanding. We learn much about Mister Miracle through his narrative captions as well as his brief and one-sided encounter with Darkseid. And when the script flips to the Justice League, Johns does some extraordinary work in providing new context and insight into the team; specifically, what is it about these absolutely unique individuals that draws them together and makes them strong as a unit?

The undisputed highlight of the issue, however, is Jason Fabok. Ever since joining DC’s flagship title he has proven himself to be an adept and dynamic artist, but Justice League #41 cuts him loose on the biggest of scales. Every panel of this issue offers something visually striking: the parallel destinies of the Justice League, the unmitigated terror of Darkseid immersed in shadow and flame, or the brutality of Grail’s assault on the League. It is even more impressive to see Fabok balance the weight and magnitude of major splash page moments like the arrival of the Anti-Monitor with minute but devastating details such as the withered body and costume of the imprisoned Ultraman. 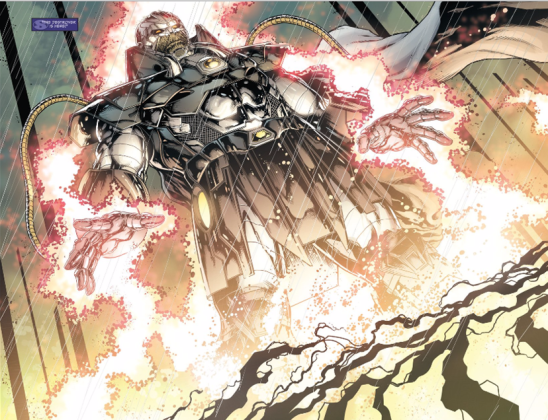 Further to this point, I think that this issue marks the most pre-Flashpoint interpretation of Superman seen since the company-wide reboot in 2011. The script, but more importantly the artwork, gives Superman the gravity and inherent goodness that have, at times, felt lost in the move to make him younger. His hair is less tousled and his frame is fuller, and the cadence and tone of his dialogue feels much more like the Big Blue Boy Scout that many fans have been dearly missing.

In fact, I will go so far as to say that no matter how strong Johns’ script is, it absolutely relies on Fabok’s artwork to succeed. The enormity of the coming battle and the complexity of the narrative web requires the flexibility of tone and the consistency of visual imagery that Fabok provides.

In its opening salvo, “The Darkseid War” is making good on its promise of scale and stakes. There is incredible danger and uncertainty in every step, but also a boundless energy that reflects the passion of its two primary creators. Johns and Fabok’s first chapter feels as big as many arcs’ finales, so it’s hard to imagine just how big this event will be.

But I cannot wait to find out.

One thought on “The Vanier Report: Tales From A DC Pull List (Justice League #41 Review)”